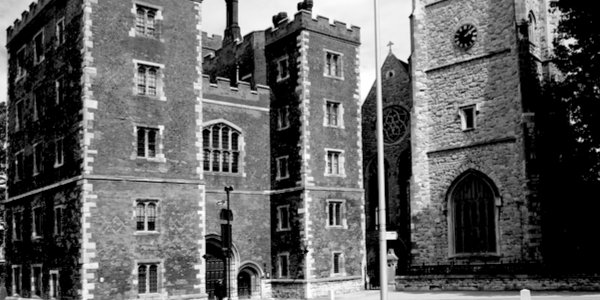 ‘Wobbly’ Welby has unexpectedly firmed up into the Rock of Gibraltar. The Archbishop of Canterbury, who is acclaimed for apologising as prolifically as water dripping from a leaking tap, has abruptly turned off the stopcock and is refusing to apologise for the most monumental cock-up of his career.

Welby has donned sackcloth and ashes and publicly flogged himself for the ‘hurt and pain’ the Church of England has (allegedly) inflicted on LGBTI people. Welby has crawled on his knees and cried mea maxima culpa for the ‘scars’ and ‘hurt’ to the campaigners for women’s ordination and ‘for my own part in that hurt’. Welby has walked on broken glass and slept on a bed of spikes as he even apologised for the Reformation. When the steam in the Lambeth pressure cooker threatened to blow off the lid, Welby apologised to a sexual abuse survivor for his office’s failure to respond to 17 letters seeking help and redress.

So why is Archbishop Justin, who like Uriah Heep has been ‘very umble to the present moment’, refusing to apologise for defaming the reputation of Bishop George Bell? Why has ‘Wobbly’ hardened his heart like Pharaoh in the story of the Exodus even after seven senior historians wrote an open letter complaining that the archbishop had shamed his office with ‘irresponsible and dangerous’ claims that Bishop Bell may have been a paedophile?

Welby’s Taliban-like intransigence has alienated even his loyal fans. According to a well-placed source inside the C of E, ‘there is a head of steam in the Church of England that could end up in his resignation over this’. If there is a miracle and the water in Lambeth Palace turns to blood or a plague of boils erupts on the skin of every canon at Canterbury Cathedral, Welby could well apologise by the time this column is published. There will be much rejoicing, and Bishop George Bell’s 93-year-old niece Barbara Whitley, who has called for Welby’s resignation, will pass the rest of her days singing the Nunc Dimittis.

So why doesn’t the spiritual head of 80 million Anglicans say the two most gracious words in the English language? Why is a man who is supposed to model repentance – the core Christian virtue at the very heart of the gospel – refusing to repent? Why has the Archbishop issued a statement that reads like a memo from the Ministry of Circumlocution and Periphrasis?

‘I cannot with integrity rescind my statement made after the publication of Lord Carlile’s review into how the Church handled the Bishop Bell case,’ states Welby categorically. Bishop Dr Gavin Ashenden has come close to describing the archbishop as psychologically unbalanced: ‘He has at best muddled himself. He is in the grip of what appears to be both a serious sin and a psychological distortion. At some point, he has conflated what he thinks is right with the notion of his integrity.’

I believe Welby is one hundred per cent sincere. His absolute and emphatic claim to occupy the higher moral ground and to be right beyond the faintest glimmer of doubt is not feigned. It is not a publicity stunt. Welby genuinely believes he is right and everyone else (including seven eminent historians, another group of theologians including heavyweights from the World Council of Churches, and Lord Carlile) is wrong.

If Welby sincerely believes he is right, we need to pray for him and to understand him sympathetically using the best spiritual and psychological resources at our disposal. The social psychologist Leon Festinger provides us with precisely such a vehicle of sympathetic insight into the archbishop’s mind and soul.

Rather unexpectedly, I stumbled on Festinger in an academic journal when doing research on the Hebrew prophets. What does psychology have to do with prophecy? Later, when studying apocalyptic cults I became even more interested in Festinger’s theory of cognitive dissonance. I also found his work invaluable in pastoral ministry when I met people who insisted that Jesus was going to return on a particular date (a house-church in a Mumbai suburb firmly believed that Jesus was coming back on November 20, 1999).

Following their research on a flying saucer cult, Festinger and his co-researchers argued that when a prophecy or strongly held belief is proved wrong, this results in intensification of belief. ‘Suppose an individual believes something with his whole heart; suppose further that he has a commitment to this belief, but he has taken irrevocable actions because of it; finally suppose that he is presented with evidence, unequivocal and undeniable evidence, that his belief is wrong: What will happen? The individual will frequently emerge, not only unshaken but even more convinced of the truth of his beliefs than ever before. Indeed, he may even show a new fervour about convincing and converting other people to his view,’ Festinger observes.

So what happens if a person is forced to do or say something contrary to the opinion he strongly holds? First, a person might change his beliefs. Welby could simply admit he made a mistake. Second, a person might change the way he perceives his actions. This is what Welby is doing by insisting on his ‘integrity’, drawing on a tenuous analogy with the real abuser Bishop Peter Ball (oddly, I wrote a column on the tale of two bishops Bell and Ball and demonstrated how the C of E ‘smears saints and shields scoundrels’) and rationalising by drawing on his personal subjective experience of ‘discovering feet of clay in more than one person I held in profound respect’ as the benchmark of justice and truth.

The global Anglican Communion can no longer afford the luxury of a Commander-in-Chief who has succumbed to what Friedrich Nietzsche called the ‘deplorable victory of the sanctified lie’.