“Bishop Bell declared peace on war. We silence him at our peril. His exculpation may well prove a critical pre-condition for our very survival”

The Plaque reads:
“Bishop Bell has a worldwide reputation for his tireless work for international reconciliation, the arts, education, and church unity. The House that bears his name provides a place where work in these areas can continue and prosper. The generosity of an Anglican Order, the Community of the Servants of the Cross (CSC) has enabled the purchase of the House. Canon Peter Kefford (Treasurer of Chichester Cathedral 2003-2009) was the prime initiator in establishing George Bell House as a centre for Education, Vocation and Reconciliation”
Photograph: Howard Coster, 1953. It is the last portrait photograph of Bishop Bell.

By now many people will have googled the words “meddlesome priest.” The phrase was uttered by James Comey, the former F.B.I. director, during his testimony on Thursday before the Senate Judiciary Committee. When he was asked if he took President Trump’s “hope” that he would drop the Flynn-Russia investigation “as a directive,” Mr. Comey responded, “Yes, yes. It rings in my ears as kind of ‘Will no one rid me of this meddlesome priest?’ ”

These are the words that King Henry II of England allegedly cried out in 1170, frustrated by the political opposition of Thomas Becket, archbishop of Canterbury. Four royal knights immediately rushed off to Canterbury and murdered the meddlesome priest.

Unlike many contemporary references to medieval history, this one is apt. Mr. Comey’s point was that a desire expressed by a powerful leader is tantamount to an order. When Senator James E. Risch, a Republican, noted that the president had merely “hoped for an outcome,” Mr. Comey replied, “I mean, this is the president of the United States, with me alone, saying ‘I hope this.’ I took it as, this is what he wants me to do.”

King Henry’s contemporaries likewise assumed that a ruler’s wish constituted a command: Although he denied any intention of inciting murder, Henry was widely held responsible for Becket’s death. The pope issued an order prohibiting Henry from attending church services or participating in the sacraments, and the king was eventually forced to do penance for the violence perpetrated in his name.

There are even more instructive parallels. Although the administration offered various reasons for the firing of Mr. Comey, it is clear that Mr. Trump considered his allegiance to F.B.I. protocol over presidential preference to be a form of disloyalty. Likewise, the main issues at stake in 1170 were divided loyalty and institutional independence.

Before Becket had been elected archbishop, he had been a close friend and faithful servant to the king. Henry had engineered Becket’s election in the expectation that, as archbishop, Becket would continue to serve royal interests. This was not an unreasonable assumption; for centuries bishops had performed dual roles, acting as temporal as well as spiritual lords. They commanded armies, enforced royal decrees, and took it for granted that the rulers who appointed them could claim their loyalty.

It was not until the 1070s that secular control over bishops began to be challenged by a series of reformist popes who sought to free clerics from secular influence and insisted that bishops’ first allegiance was to the church. This goal was rarely fully realized — kings were generally closer than the pope and more able to dispense both patronage and punishment. But to Henry’s fury, Becket unexpectedly embraced reform, becoming a vigorous defender of church privileges and critic of royal interference. Henry felt intensely betrayed. Becket died not because he was “meddlesome,” but because, in the king’s view, he was disloyal.

The Becket episode may likewise help explain why Mr. Trump’s advisers did not prevent him from firing Mr. Comey. King Henry expected all his officials to share his fury at Becket and saw any failure to do so as a betrayal as well. The phrase “meddlesome priest” was a later invention, made famous by Hollywood in the 1964 film “Becket.” Henry’s actual exclamation — or at least the cry attributed to him in the medieval sources — was “What miserable drones and traitors have I nurtured and promoted in my household, who let their lord be treated with such shameful contempt by a lowborn clerk!’”

No wonder the four knights were so eager to take the hint. Henry’s courtiers may well have feared that if they didn’t make a conspicuous display of loyalty, the king might turn on them next. Treachery was a capital offense.

The aftermath of the Becket episode may, moreover, resonate in one final way. Although Henry had longed to get rid of Becket for years, he presumably came to rue the day his words of rage were heeded. In addition to performing humiliating penance, he had to swear obedience to the pope, make a series of concessions to the church and eventually face rebellion. One suspects that Mr. Trump, too, might come to feel the wisdom of the words “be careful what you wish for.”

“Bishop Bell has a worldwide reputation for his tireless work for international reconciliation, the arts, education, and church unity. The House that bears his name provides a place where work in these areas can continue and prosper. The generosity of an Anglican Order, the Community of the Servants of the Cross (CSC) has enabled the purchase of the House. Canon Peter Kefford (Treasurer of Chichester Cathedral 2003-2009) was the prime initiator in establishing George Bell House as a centre for Education, Vocation and Reconciliation”

Photograph: Howard Coster, 1953. It is the last portrait photograph of Bishop Bell. 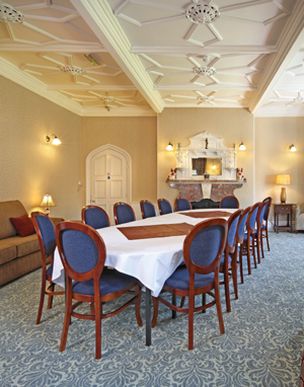 Church of England
Archbishop of Canterbury

The Safeguarding Industry has become a Witch Hunt

My blood ran cold the day I watched The Crucible. It was a “reality show” vividly depicting how the vindictive hysterics and histrionics of a young woman infatuated with a married man could destroy an entire community. The Crucible is a partially fictionalised portrayal of the infamous Salem witch trials that took place in the Massachusetts Bay Colony in the spring of 1692.

What freaked me out was the realisation that justice was now at the mercy of hysteria. The Salem witch trials are back in the form of the new ‘safeguarding’ hysteria in the Church of England.

Anxious to wash the blood of his hands while the mob bays for blood, Archbishop Justin Welby has thrown one of his predecessors to the wolves and is determined to put an end to the global ministry of Archbishop George Carey.

How did safeguarding, which rightly exists to protect the vulnerable, get turned on its head to punish the victimised innocent?  Now the powers that be have decided to pursue anyone they believe to be guilty. But guilty of what? They treat a sin of omission as if it was the sin of commission. If a person is deemed not to have fulfilled their responsibility in adequate safeguarding, albeit many years previously when no such concept existed, that person is now going to be held responsible, penalised and punished. The media frenzy that follows effectively destroys the reputation of the person.

The Church of England and its hierarchical structures have chosen to take safeguarding into a new stratosphere.

They have weaponised it in order to protect themselves.

The hysteria began with Jimmy Savile. Savile’s acts were an abomination.  So are all who perpetrate such dreadful acts on innocent children and adults. But where does responsibility start or end for those caught up in it?  For example, if a sergeant has misbehaved, should the general be sacked?  Of course, if his captain or major knew and did nothing, they should be dismissed, but should the colonel and the general also take full responsibility and be removed? What of the politician?

We are now in a Kafkaesque situation where it is impossible to satisfy all the authorities’ requirements.  Equally we are in an Orwellian society, where anyone who does not spy on the rest and report any real or imagined faults is held guilty.  Justin Welby is becoming a new Borgia in relation to Savonarola, where the planning of a person’s destruction becomes paramount because they do not agree with then. He may argue that he is simply allowing the safeguarding process to take place unimpeded. But by his actions he has shown the opposite.

The Church of England and its hierarchical structures have chosen to take safeguarding into a new stratosphere. They have weaponised it in order to protect themselves. This weapon has now become not only defensive but also offensive. In its offensive form it is immensely destructive. With no lower limit on the time since the event or the smallness of the omission, this weapon could be used selectively to remove from ministry anyone the hierarchy may have taken against.

Whether offensive or defensive, the weaponisation of safeguarding will ultimately alienate anyone from entering the priesthood or from taking any role within the church, whether choir member, lay preacher or archbishop. Yet, this ticking time bomb is not recognised.  Truth has been turned on its head. Truth is now kicking its legs, calling for the world’s attention, and everyone is silent.

Everyone lives in fear. No one knows who will be next. The witches are watching. Soon they will be pointing. Then they will start screaming. And the next head will be strung up on the gallows.

(Originally published in The Conservative Woman)

“Moral, legal and common sense appears to have deserted the Church of England. The Presumption of Innocence has been described as ‘the golden thread that runs through British justice’. That thread was broken by the October Statement, and replaced with the Presumption of Guilt. The Media – including the BBC – assumed Bishop Bell’s guilt on the basis of the Church’s Statement, and their subsequent headlines reflected that assumption. No attempt was made by the Church, immediately after the headlines, to correct the media interpretation of the Statement. This would strongly suggest a Presumption of Guilt on the Church’s part towards Bishop Bell” – Richard W. Symonds