All the colours of the rainbow

Childrens’ rainbow pictures have become a familiar sight in windows across the UK and have become a symbol of hope during the coronavirus crisis.

Rainbows have symbolised many things over the centuries and they also appear in the scriptures of different faiths.

Along with the heartbreaking images of the Covid-19 crisis – the face masks, coffins and deserted streets – the rainbows which children are exhibiting from their windows or crayoning on to pavements come as blessed relief.

As well as coming to symbolise the value of the NHS, the rainbow has, in recent years, also come to stand for inclusivity, Gay Pride and post-apartheid South Africa.

But there’s also a rich and ancient symbolism to be found in many of the world’s religions. One of the oldest images is that of the Rainbow Serpent in Australian Aboriginal traditions.

The serpent is often seen as the creator, shaping the earth’s mountains and valleys as it moves over the land. When seen in the sky it is said to be moving from one waterhole to another. Although usually benign, the Rainbow Serpent can also be destructive, which is why Aboriginal peoples take care not to disturb it when it appears.

A symbol of hope in the time of Covid-19

Rabbi Shoshana Boyd-Gelfand and children reflect on the meaning of the rainbow.

In Hindu teaching the colours of the rainbow correspond to the energy centres or chakras in the body, beginning with the colour red at the base of the spine and moving up to the crown of the head, ultra violet in colour, from where the life force departs at death.

According to Dr Chetna Kang, a priest in the Bhaktiyoga tradition, the Hindu Scriptures speak of how all creation unites in the service of Krishna with rain and sun co-operating to form the rainbow to delight him. “The rainbow is also spoken of in the Vedic text as Indradhunesh, literally Indra’s bow,” says Dr Kang, “Indra is the demi-god responsible for the weather. Rainbows are not his weapon, his bow and arrow – they reflect his responsibility in directing the weather.”

The Biblical account of Noah’s flood ends with God setting a rainbow in the sky as a sign of His promise that He will never again destroy the earth. “The flood happened because God was upset about the violence in the world, “ explains Reform Rabbi Shoshana Boyd-Gelfand, “The bow and arrow is a symbol of violence, but God takes that and transforms it into a sign of promise and hope.”

In Thai Buddhist traditions the rainbow is a staircase connecting earth with heaven down which the gods descend. This idea of the rainbow as a bridge between heaven and earth is also found in Greek mythology; the goddess Iris personifies the rainbow and carries messengers from the gods to humanity. In some texts the rainbow is created from the colours of her coat as she flies across the skies. 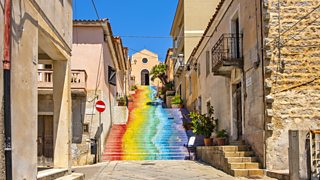 Rainbow staircase leading to the Church of St Lucia in Arzachena, Sardinia

How the rainbow was formed was one of the great scientific questions that took thousands of years to resolve.

The rainbow bridge appears again in Norse traditions. Viking texts tell the story of Bifrost , the rainbow bridge which connects world of gods (Asgard) with world of men. “There’s also the belief that at Ragnarok, the final battle between the gods and power of darkness, the bridge would shatter,” says Jenny Uzzell, a religious educational consultant and practising Druid, “So for a Viking or a pagan Saxon looking at the rainbow will help them to feel safe because it means that time hasn’t come yet so it’s a very reassuring symbol.”

According to Tom McLeish, Professor of Natural History at the University of York, the question of how the rainbow was formed was one of the great scientific questions that took thousands of years to resolve. In his work on the atmosphere Aristotle thought it was reflection in a cloud, an idea taken up by Islamic commentators towards end of first millennium.

In the 13th century Robert Grossteste, who became Bishop of Lincoln, wrote a treatise on the rainbow, suggesting it was not reflection but refraction in a cloud. “Then finally in the 13th century an Islamic scientist in Bagdhad, Kamal al-Din al-Farisi Kamal, and a Benedictine monk, Dietrich of Freiburg in modern day Germany, both conducted experiments and saw how sunbeams refracted through raindrops. So it was a continuous and lovely problem.”

And seeking to solve it was for many a religious imperative, says Professor McLeish. “In his experimental work on light, Dietrich of Freiburg says that what got him started on his exploration was the ‘difficult question posed by God to Holy Job’ in the Bible: ‘By what way is the light parted, which scattereth the east wind upon the earth?’ It was a scientific quest but it was also a spiritual one.”