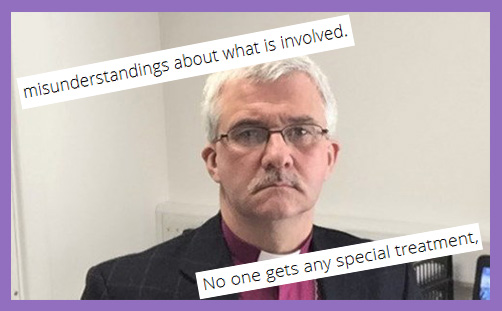 The Bishop of Huddersfield, Dr Jonathan Gibbs, addresses the General Synod in February where he said that “serious money” was needed to fund redress for survivors of clerical abuse

THE lead bishop on safeguarding, Dr Jonathan Gibbs, has agreed that the C of E’s system needs “root-and-branch change” in order to improve its response to survivors.

Last week, survivors, lawyers, academics, and members of the clergy and General Synod wrote to the chair of the Charity Commission, Baroness Stowell, urging her to intervene to address “the failures of the Archbishops’ Council of the Church of England to devise a safe, consistent and fair system of redress” for victims and survivors of abuse (News, 14 August).

In his formal response last week, Dr Gibbs, who is the Bishop of Huddersfield and part of the National Safeguarding Team (NST) and Steering Group (NSST), deflected criticism of the NST and its core-groups system, adding that the NST should be trusted and respected.

The letter to the Charity Commission, which also criticises the “impaired transparency and intermittent accountability” of the NST, calls for a complete reform of safeguarding practice and policy within the C of E. It urges the Church not to wait for the final report of the Anglican investigation by the Independent Inquiry into Child Sexual Abuse (IICSA), which is due to be published this autumn (News, 1 May), before acting.

Dr Gibbs told the programme: “There is no doubt that, in the past, our systems have failed considerably, and that was made very clear during IICSA. That made very painful listening for all of us involved in the Church and our hearts go out to and our principle focus must be on survivors, and improving the way in which we respond to survivors. . .

“There is still a long way to go. There is journey; but it is a journey to which we are absolutely committed. . . The direction of travel is going to be substantially influenced by the IICSA report when it comes out very shortly. We made clear our commitment to that journey of change especially in the debate at the General Synod back in February” (News, 14 February).

Dr Gibbs also remarked on the research, published in the Church Times last week, by Dr Josephine Anne Stein, who estimated that the Church spends between £20 and £25 million on safeguarding, but that just £55,000 of this went to survivors in the form of redress (News, 14 August).

“I welcome that piece of research; it is a great piece of work. . . The Church’s expenditure on safeguarding work has expanded very substantially in recent years and that is really important because that is part of making sure that we do begin to respond much better to all of these safeguarding concerns.”

He agreed that the money was not directly benefiting survivors, but “that is the commitment we made in February.” A staff member was being appointed “very soon” to begin advancing redress, he said.

“Even in advance of that work, I have written to the Archbishops and the heads of the Church Commissioners to say I want to set up an interim scheme that enables us to respond much sooner than the time it will take to put the full scheme in place. So, absolutely, not nearly enough has been done here on redress, and redress is not just about compensation, it is about helping people rebuild their lives, and that is underway. So, I welcome that; as far as I am concerned it is weight to help push forward.”

Dr Gibbs maintained, however, that he did not support all of the letter’s criticisms. “I recognise what lies behind the letter: its deep frustration with the Church’s failures, in particular to address the needs of survivors. [But] no, I don’t agree with the specifics of the criticisms there, and implications about a lack of integrity on the part of some of my colleagues. I think those are simply unfortunate.”

One of the signatories of the letter, Lord Carlile, who wrote the independent review into allegations against a former Bishop of Chichester, the late George Bell (News, 22 December 2017), said earlier in the programme: “The Church has a very haphazard way of approaching safeguarding cases. There are numerous conflicts of interest that arise; it doesn’t fit into any recognisable jurisdictional structure; neither complainants, nor people complained against are getting a fair hearing. Additionally, the process is far too slow.”

Dr Gibbs said: “Making change in a big institution always takes time; there is always a certain amount of institutional resistance that is just part of being part of large organisation. There is always a danger of thinking someone else is dealing with this issue.” He reported that the Archbishop of Canterbury shared his frustration with the present system.

Money for abuse survivors is dwarfed by legal and admin bill

Victims of child abuse speaking about their experiences for the first time, says IICSA