The commission was halted in 2015, after an allegation of sexual abuse against Bell 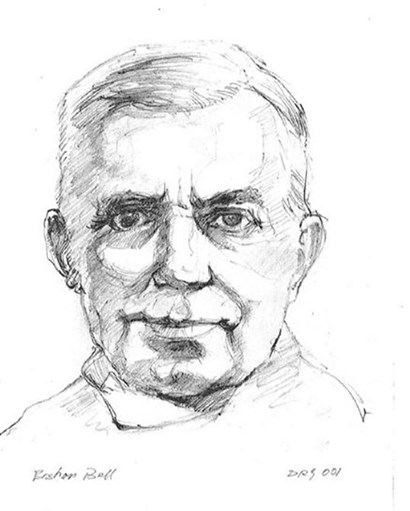 A sketch of George Bell by David Goodman

THE Archbishop of Canterbury has welcomed plans for a statue of the late Bishop of Chichester, George Bell, to be completed and installed in Canterbury Cathedral, hours after apologising for the Church’s botched handling of an allegation of sexual abuse against the Bishop.

Plans for the statue were halted in 2015, after a woman known as “Carol” alleged that Bishop Bell, a former Dean of Canterbury Cathedral, had sexually abused her in the 1940s, when she was nine. The diocese of Chichester apologised and reached a settlement with Carol within the year (News, 23 October 2015).

An independent investigation by Lord Carlile later concluded, however, that the Church had rushed to judgement in the case, which, Lord Carlile said, should not have been made public (News, 22 December 2017). He wrote that, had the Church seen the evidence that his review had managed to uncover without great difficulty, the case would not have been thought strong enough even to be tested in court.

The news sparked fresh allegations against Bell, which were dismissed in a report on Thursday of last week by an ecclesiastical lawyer, Chancellor Timothy Briden, Vicar-General of the Province of Canterbury.

The report was the conclusion of a second investigation, commissioned and made public by the Bishop of Chichester, Dr Martin Warner, in January of last year. Both Dr Warner and the Archbishop issued statements apologising.

The next day, the Friends of Canterbury Cathedral, which was founded by Bell when he was the Dean of Canterbury (1924 to 1929), announced that a statue of him which had first been commissioned in 2015, would be completed and installed at the cathedral, paid for by the Friends.

“To commemorate his work whilst in Canterbury, the statue will be placed in one of the exterior niches at the west end of the cathedral, joining those of other influential figures.”

The Friends have declined to comment further or provide pictures of the statue, but a newsletter sent to the Friends of Canterbury Cathedral in the United States, in February 2014, gives details of three new commissions for the west front of the cathedral: one of Dean Bell, and two others of the Queen and the Duke of Edinburgh.

It reads: “The statue of Dean Bell has been commissioned and carving has begun out at Broad Oak [in Kent].

“The maquettes for the royal statues of Her Majesty the Queen and the Duke of Edinburgh have been approved by Chapter and the Cathedrals Fabric Commission and work will begin on their manufacture later in the year. Some of our own masons are involved helping the sculptor, Miss Nina Bilbey, and it is hoped that all the statues will be ready for installation towards the end of the year.”

The statues of the Queen and Prince Philip were unveiled on the west front in March 2015. When approached this week, Ms Bilbey said that she was unable to comment at present.

Archbishop Welby posted a link to the announcement on Twitter, last Friday. He wrote: “I warmly welcome the announcement today that the statue of Bishop George Bell will in due course be completed and installed at Canterbury Cathedral, as a permanent reminder of his unique contribution to international peace and to the Church of England.”

His comment echoed his apology for the “mistakes” made in handling the original allegation, which he previously said had left a “significant cloud” over the name of Bishop Bell, despite protests from historians that Bell’s name should never have been implicated (News, 22 January 2018).

Bishop Bell’s biographer, Professor Andrew Chandler, has been campaigning with the Bell Society to clear Bell’s name. “To invest the authority of high public office, and the name and the resources of the Church itself, in a sustained denigration of an innocent, dead man, is profoundly disturbing,” he said this week.

“To maintain that denigration in public, even in the face of the most authoritative, experienced, and principled criticism, for over three years, is something very serious indeed. It does represent, in a fundamental way, an abuse of moral power.”

A spokesman for Church House suggested last week that Chichester Cathedral might “review” its decision to remove Bishop Bell’s name from its grant scheme. It was up to individual institutions, however, to decide whether to reinstate his name on buildings, he said.

Several buildings dedicated to Bell have been renamed in the past three years, including George Bell House, a conference centre in Chichester Cathedral close, which was dedicated in October 2008, on the 50th anniversary of his death (Features, 3 October 2008). The building was renamed 4 Canon Lane in 2016.

An event — “Rebuilding Bridges” — is being hosted there next week by the Bell Society. It will ask whether the Dean and Chapter will restore the name of Bell to the building, and whether Bishop Bell be “cleared of abuse” by the Archbishop.

‘I am ashamed of the Church’, Archbishop Welby admits to IICSA hearing

IICSA: the dean’s bonfire and the destroyed report at Chichester Cathedral