The Bishop of Bath and Wells, the Rt Revd Peter Hancock (centre) with Meg Munn and Phil Johnson

VAGUE and evasive talk of culture change” over safeguarding is “not enough”, the Bishop of Bath & Wells, the Rt Revd Peter Hancock, told the General Synod on Sunday.

In a presentation, the Bishop said that the Church’s approach to survivors had been “inadequate”, and that all had a part to play in improving safeguarding practice.

“Vague and evasive talk of culture change is not enough,” he said. “It is driven by structures, appointments, and decisions. . .

“My challenge to Synod is that, if you are concerned about safeguarding in the Church, now is the time up to stand up, be counted, and get involved.”

A survivor who formed part of the presentation group, Phil Johnson, was one of the first to come forward, in 1996, with allegations of sexual abuse by a former Bishop of Gloucester and Lewes, Peter Ball. Mr Johnson is a member of the National Safeguarding Panel.

Mr Johnson told the Synod that safeguarding should be simple. “It is about vigilance, protection, and compassion,” he said. “It is not about endless bureaucracy.”

He said that the Church should not think that its safeguarding was necessarily better simply because it was spending more money on it.

Mr Johnson went on to say that the work to create a survivors’ reference group was very difficult, largely because so many victims had an “immense lack of trust” in the Church and the National Safeguarding Team (NST).

He was glad that the Safe Spaces project was close to completion, although he noted that he had first proposed it nearly six years ago, and, although money had been allocated for it, not a single penny had yet been spent on survivors. “This typifies how the Church does things,” he said. “We all need to come together to make things simpler, more efficient, quicker, and more cost-effective.”

The session began with a period of silence, and the Bishop said a prayer that had been written by a survivor of abuse: “Teach us to thirst for justice and righteousness in our Church . . . We lament the safeguarding failures of our Church. . . Helps us to repair broken lives so that those our Church has harmed may no longer survive but thrive.”

Safeguarding questions had been split from the rest of the questions, which were heard on Friday, to allow proper space for them. Bishop Hancock thanked the Business Committee for this approach; a presentation on safeguarding was given by the bishop, Mr Johnson, and Meg Munn, the chair of the National Safeguarding Panel.

In response to a question from Carolyn Graham (Guildford) about safeguarding cases’ being “passed around from diocese to diocese”, Bishop Hancock said that work was under way on an information-sharing system. A national case-management system would mean wider access to information lodged centrally. This would bring rigour. Asked by Canon Gavin Kirk (Lincoln) about survivors whose experience had led them to distrust the diocese where they lived, Bishop Hancock said that the voices of survivors must be heard in the process of redrafting safeguarding guidance.

He told Canon Rosie Harper (Oxford), who asked about the “moral imperative to restore and heal”, going further than “bare minimum legal redress”, that one part of the answer was to have a “standards-based approach to safeguarding”, and another was a charter “to provide survivors with confidence there is going to be consistency across dioceses”.

Some responses to safeguarding issues had been “woefully inadequate”, he said. He also reported that there had been attempts to establish mediation between survivors and the NST and some work had recently been commissioned on “restorative justice”.

In his presentation, Bishop Hancock said that the Independent Inquiry into Child Sexual Abuse (IICSA) hearings had not been an easy experience for the Church. Some “justifiably difficult questions are being asked of us”, he said. But the inquiry had shone a “helpful light” on the C of E’s safeguarding procedures and failings.

He strongly urged every member of the Synod to read the two interim reports already released by IICSA: one on the case study of Chichester diocese and Peter Ball, and one on child sexual abuse in the context of religious institutions. The key findings in both reports, which were “harrowing and difficult to read”, were that clericalism and deference were causing “significant harm” (News, 9 May

A new case-management system for both national and diocesan safeguarding teams, which had been “sorely lacking”, was finally almost ready and would be rolled out next year, he reported.

He also said there would be three new lessons-learned reviews of the cases of John Smyth, the Revd Trevor Devamanikkam, and the late former Bishop of Chester, Victor Whitsey (News, 10 February 2017, 16 June 2017, 24 May).

A working group had been convened to examine whether the Clergy Disicpline Measure (CDM) was fit for its purpose in relation to safeguarding, he said. The group would have its first meeting in October (News, 31 May).

Ms Munn paid tribute to the three survivor representatives on the panel, who, despite being so damaged by their experiences of abuse, were still able and willing to help the Church become a safer place.

“The Church is late to this work: it needs to catch up; it has a lot to do,” she said. “I see a lot of people with good intentions, but you all need to do more, and do more, more quickly.” 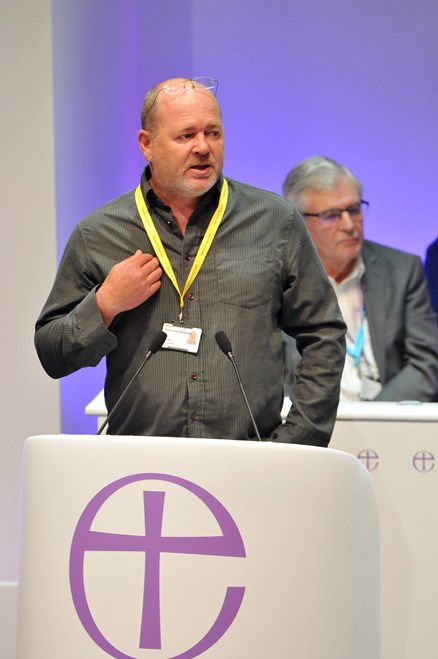 Mr Johnson praised the leadership of Ms Munn and said that he was hopeful that this increased level of scrutiny would bear fruit. In particular, he was convinced that the CDM procedure was inadequate and needed reform.

The proposed redress scheme was very important for survivors and would need to be well funded, Mr Johnson said. It must include all cases of abuse, including those that had already come to financial settlements; many of these were agreed out of fear that the survivor might be landed with the Church’s “astronomical” legal costs.

He also supported the introduction of mandatory reporting of abuse allegations, along the lines developed by the pressure group Mandate Now. Two-thirds of current safeguarding cases were still dealt with exclusively in-house, he noted. Without actual sanctions for people who failed to pass on disclosures, the culture would never change.

In the questions following the presentations, the Archbishop of York, Dr Sentamu, on a point of order, asked the view of the Synod on mandatory reporting, to which a majority raised their hands in favour. It was one of the recommendations of the IICSA report on Chichester diocese.

The Bishop of London, the Rt Revd Sarah Mullally, asked whether the Church still had a problem with clericalism, and whether it hindered good safeguarding practice.

Mr Johnson said that there had been a lot of deference, but that this was not a problem only for the Church. He gave the example of football clubs, where coaches had a great deal of authority. This was evident in the conviction of Barry Bennell, a former coach at Manchester City and Crewe Alexandra, and the conviction of Bob Higgins, the former Southampton coach, both for child sexual abuse.

The natural tendency to keep things in-house was a problem, Mr Johnson said. “Watching IICSA this last week, there’s clearly evidence that this remains,” he said. It was everyone’s responsibility to address this, and to make these subjects non-taboo. “Things should be recorded in a routine manner,” he argued.

He received a standing ovation for his words during the Synod debate.

There was criticism that there was not a full Synod debate on safeguarding. Last week, Martin Sewell, a representative from Rochester diocese, called the Synod “lazy and incurious” (News, 5 July).

Matthew Ineson, a survivor, who was handing out leaflets outside York Minster on Sunday morning, said: “The Archbishops blocked the debate [on safeguarding]: they are manipulating the Synod.

“There is a cover-up going on from the very highest parts of the Church; Archbishop Welby has persistently taken no further action. The way victims are treated is just diabolical.”

At the end of the service, before the blessing was given, Dr Sentamu led the congregation in prayer for those who were part of IICSA, and for survivors.