The Church is led by the Archbishops of Canterbury and York and 106 other bishops. They provide guidance and direction to the churches across the country and make decisions on the Church in society. The General Synod is an assembly of bishops, clergy and laity, and creates the laws of the Church. The seven National Church Institutions work together to support the mission and ministries of the Church. 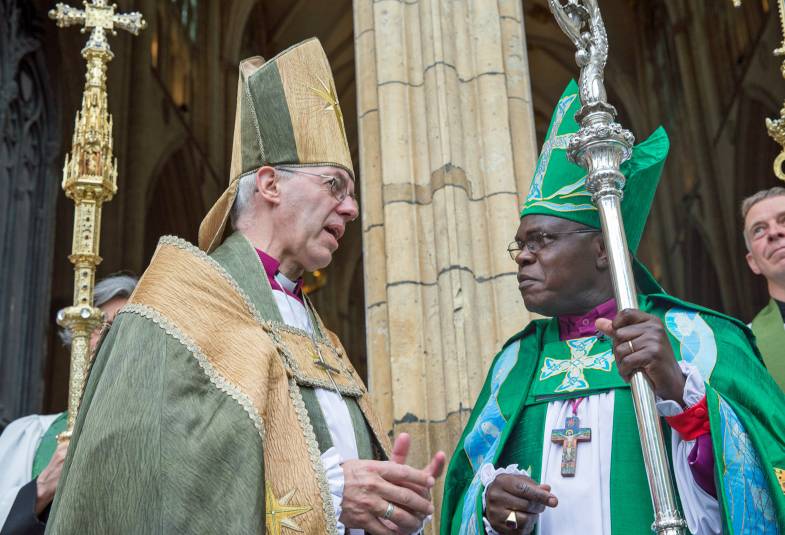 Each of our 42 dioceses has a lead bishop known as a diocesan bishop. Most are supported by other (suffragan or area) bishops. All diocesan bishops are members of the House of Bishops, along with a small number other elected bishops. The House of Bishops is one of the three houses of the General Synod. The General Synod is an assembly of bishops, clergy and laity, which meets at least twice a year to debate and decide the Church’s laws and discuss matters of public interest.

Our two archbishops and 24 other bishops sit in the House of Lords, making a major contribution to Parliament’s work. They are known as Lords Spiritual.

Her Majesty the Queen is the Supreme Governor of the Church of England. The Queen appoints archbishops, bishops and deans of cathedrals on the advice of the Prime Minister.

There are seven national administrative bodies that work together to support the mission and ministries of the Church. These are called National Church Institutions (NCIs).

Each has a role to play in helping the day-to-day work of churches across England. They serve as the Church’s central office, managing finance, education, communications, and more, to keep the Church of England growing.

They work with parishes, dioceses (regional offices), schools, other ministries and our partners at a national and international level.

The seven NCIs are:

The NCIs are separate legal entities, but they are a common employer. The present arrangements were established under the National Institutions Measure 1998.

THE ARCHBISHOPS’ COUNCIL
The Archbishops’ Council was established in 1999. The Council is a charity, set up in law to co-ordinate, promote, aid and further the work and mission of the Church of England. It does this by providing national support to the Church in dioceses and locally, working closely with the House of Bishops and other bodies of the Church. The Archbishops’ Council is one of the seven National Church Institutions.

The Archbishops’ Council has nine objectives.

Ministry
To ensure there are sufficient ordained and lay ministers of the required gifts and qualities who are effectively deployed to enable the Church of England to fulfil its mission, and to support those ministers in their calling, development, ministry and retirement

Education
To promote high quality Christian education in Church of England schools and voluntary education settings, and through our Church contribution to other schools, colleges, further and higher education institutions

Resources for the Church
To help dioceses and cathedrals to be most effective in their mission, by providing cost-effective national and specialist services and advice

A Church for all people
To be a Church that can provide a home for all people in England
The Archbishops’ Council plans for 2017.

Safeguarding: to ensure
all children and vulnerable
adults are safe in the Church,
by continuing to build
infrastructure and processes
for the National Safeguarding
Function to promote a safer
Church at all levels, including
the development of policies
and practice guidance, longterm audit processes, training,
high-level casework handling,
survivor engagement and
responding to the Independent
Inquiry into Child Sexual Abuse
(IICSA).

From Wikipedia, the free encyclopedia

The Archbishops’ Council is a part of the governance structures of the Church of England. Its headquarters are at Church House, Great Smith Street, London SW1P 3AZ.

The Council was created in 1999 to provide a central executive body to co-ordinate and lead the work of the Church. This was a partial implementation of the recommendations of the report “Working Together as One Body” produced by Michael Turnbull (then Bishop of Durham) in 1994.

The Council describes its objectives as:

And its objects as:

The Archbishops’ Council was established by the National Institutions Measure passed by the General Synod of the Church of England in 1998.[1] It has its own legal identity and is, in addition, a charity.

The Council is made up of:

The Council is one of the “National Church Institutions”;[3] the others include the Church Commissioners, the Church of England Pensions Board and the General Synod.

The work of the Council is assisted by a number of committees:

In 2006, the Council employed about 250 staff. The senior posts include:

In 2006, the Council had a budget of approximately £61 million, principally derived from the Church Commissioners (about £32 million) and contributions from each of the dioceses(£24.5 million).

Spending in that year included grants to the dioceses (£31 million), training clergy (both funding for colleges and allowances for individuals in residential training – £10 million), grants to organisation such as Churches Together, the Church Urban Fund and the World Council of Churches (£2.2 million), and housing assistance for retired clergy (£2.8 million).[4]