The great preacher, writer, theologian and witness to the faith, Dietrich Bonhoeffer,was executed on April 9, 1945, just days before the Nazi camp where he was held, Flossenbürg, was liberated. He was 39.

On 4 April 1945, the diaries of Admiral Wilhelm Canaris, head of the Abwehr, were discovered, and in a rage upon reading them, Hitler ordered that the Abwehr conspirators [those who had plotted for Hitler’s assassination] be destroyed.

Bonhoeffer was led away just as he concluded his final Sunday service and asked an English prisoner, Payne Best, to remember him to Bishop George Bell of Chichester if he should ever reach his home: “This is the end—for me the beginning of life.”

Bonhoeffer was condemned to death on 8 April 1945 by SS judge Otto Thorbeck at a drumhead court-martial without witnesses, records of proceedings or a defense in Flossenbürg concentration camp.  He was executed there by hanging at dawn on 9 April 1945, just two weeks before soldiers from the United States 90th and 97th Infantry Divisions liberated the camp,  three weeks before the Soviet capture of Berlin and a month before the surrender of Nazi Germany.

Eberhard Bethge, a student and friend of Bonhoeffer’s, writes of a man who saw the execution: “I saw Pastor Bonhoeffer… kneeling on the floor praying fervently to God. I was most deeply moved by the way this lovable man prayed, so devout and so certain that God heard his prayer…In the almost fifty years that I worked as a doctor, I have hardly ever seen a man die so entirely submissive to the will of God.”

His legacy has been profound:

Bonhoeffer’s life as a pastor and theologian of great intellect and spirituality who lived as he preached—and his being killed because of his opposition to Nazism—exerted great influence and inspiration for Christians across broad denominations and ideologies, such as Martin Luther King Jr. and the Civil Rights Movement in the United States, the anti-communist democratic movement in Eastern Europe during the Cold War, and the anti-Apartheid movement in South Africa.

Bonhoeffer is commemorated in the liturgical calendars of several Christian denominations on the anniversary of his death, 9 April. This includes many parts of the Anglican Communion, where he is sometimes identified as a martyr.

In our own troubled time, Bonhoeffer’s courage in the face of evil, and his suffering in the face of persecution, stand as a testament to true Christian witness — the very essence of what it means to be a “martyr.”

His likeness is preserved in Westminster Abbey, alongside other martyrs, including St. Oscar Romero and Martin Luther King, Jr. 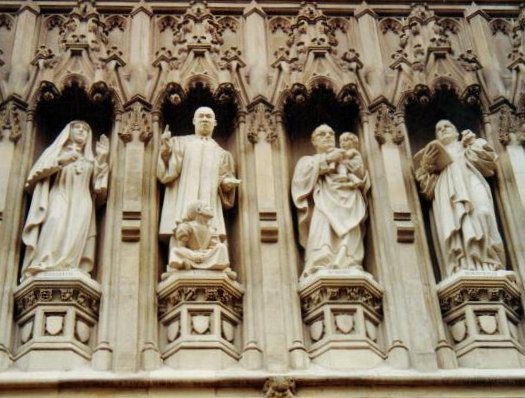 He continues to teach and inspire Christians today.

“The first service one owes to others in a community involves listening to them,” he wrote. “Just as our love for God begins with listening to God’s Word, the beginning of love for others is learning to listen to them. God’s love for us is shown by the fact that God not only gives God’s Word but also lends us God’s ear. . . . We do God’s work for our brothers and sisters when we learn to listen to them.”

He also urged us to be open to God’s will in our lives, whatever that may be.

“We must be ready,” he said, “to allow ourselves to be interrupted by God.”

Dietrich Bonhoeffer, pray for us.