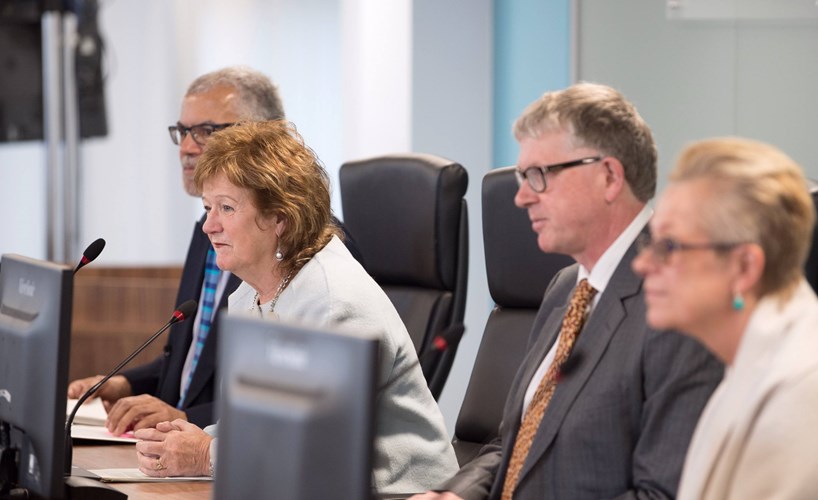 Professor Alexis Jay and members of the Inquiry panel

THE Church of England must be prepared for new revelations and disclosures of clerical sex abuse during, and in the wake of, a public hearing of the Independent Inquiry into Child Sex Abuse (IICSA), a spokesperson for the National Safeguarding Team (NST) has said.

Starting on Monday, the public hearing in London will consider the extent of any institutional failures to protect children from sexual abuse within the Anglican Church.

It will use the diocese of Chichester as a case study to examine the “culture of the Church” and whether its “behaviours, values, and beliefs inhibited or continued to inhibit the investigation, exposure, and prevention of child sexual abuse” (News, 2 February).

An NST spokesperson said on Tuesday: “High-profile cases that we have been involved with before, such as independent reviews, have led to more disclosures. We must assume that people will come forward for the first time: we would not want to rule that out.”

The public hearing is due to conclude on 23 March.

It is one of 13 investigations included in the IICSA — the largest public inquiry ever undertaken in the UK, which is looking into several institutions, including the Roman Catholic Church and local-authority children’s homes.

The Archbishop of Canterbury confirmed last week that he had been called to give evidence at the Chichester hearing. He said that the Church had to acknowledge “where it went wrong” — but that this did not mean that Christian values were wrong.

“It doesn’t mean that our Christian heritage was somehow totally misguided from beginning to end: it means that the Church did awful things (as well as many good things), but that it failed badly around the issues of the care of vulnerable children and adults,” he said.

“We have to face the consequences of that, [learn] to be genuinely transparent and honest, and we have to be repentant. We need to use religious language to repent.”

The former Archbishop of Canterbury Lord Williams, and the current Bishop of Chichester, Dr Martin Warner — who have both submitted statements — are also expected to be called to give evidence at the hearing, although the final timetable has yet to be confirmed.

The hearing will also examine C of E safeguarding policies, training, leadership, recruitment, and disciplinary processes, how effectively it has worked with statutory organisations, and its treatment of survivors, including the handling of allegations against a former Bishop of Chichester, George Bell.

Professional support will be made available by the IICSA to those present at the hearing. The NST has arranged for at least one bishop to be there on each day to provide pastoral support, as well as a private room for quiet reflection.

A spokesperson for the NST said that it had been working towards openness and transparency. “Given the history and legacy of poor practice, we have taken the issue of transparency into our approach to the inquiry: we have commissioned independent reviews, built a culture of continuous learning, and independently audited each of the 42 dioceses, all of which are being published.

“The Inquiry will be a difficult experience for survivors, the Church, and society, but we have to approach it as an opportunity to improve, to learn, to build on the work we are doing, and, hopefully, accelerate that work for the future.”

There are in fact about 2600 cases ongoing, not 3300, as previously reported by the Bishop of Bath and Wells, the Rt Revd Peter Hancock, in a written question to a Synod member, Kat Alldread, last month (News, 16 February).

More than half of these 2600 cases involved children, and more than a quarter related to church officers — not 18 per cent as previously reported, the clerk to the Synod, Dr Jacqui Philips, confirmed in a letter to Mrs Alldread this week.

A church officer is defined as anyone who is appointed or elected by or on behalf of the Church to a post whether they are ordained or lay, paid or unpaid.

Hearing the cries of the abused